Save Your SearchRefine Search

Inn Victoria offers a new owner the opportunity to step into a very successful operation business. The Inn has 9 guest bedrooms all with private baths, assistant managers suite of 10th bedroom, plus 1,000 sq ft owners quarters, first floor professional laundry facility and large public spaces which are beautifully decorated and well maintained. The outdoor patio and wedding garden with 3 large pergolas is idea for small gatherings. The annual occupancy and average daily rate is higher than most B&B's of this size. It is a testament to the current owners sincere dedication to the business and providing a wonderful guest experience. The Inn is a member of a 4 Inn to Inn walking group. The revenue from the Inn to Inn walking tours is substantial. It attracts guests from all over the world. The location is only a few miles from I-91, a north south interstate on the east side of Vermont allowing millions of people within a 4 hour drive to visit the INN. There is also upside to the revenue with an enhanced marketing plan. The Village of Chester is considered one of the most picturesque Villages in Vermont. You do not want to miss out on this opportunity if you are serious about owning a B&B. Benefits of Inn Victoria Written by the Sellers can be found under "D" below the picture above. 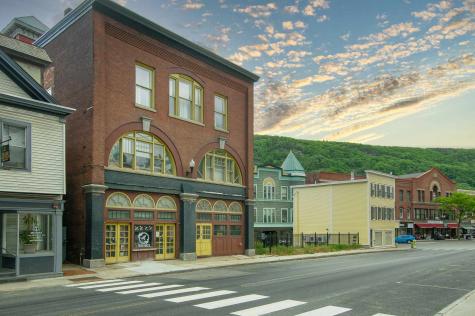 This fabulous, multi-use building offers so many options for use. The Bellows Falls firehouse, built in 1904, is a four-story stone-trimmed brick building displaying simplified elements of the Romanesque Style both on its three-story Rockingham Street front facade and the four-story Canal Street east facade. Its presence reflects the rich architectural and economic history of downtown Bellows Falls when the papermills and railroads were flourishing. Since its use as a working firehouse and police station stopped in the 1980's, it has had a mix of commercial and residential tenants. The current owners purchased the building in 2002 and have upgraded many features, including new twin Boderus boilers in 2012, new roofing, and a recently completed sprinkler system. Currently fully occupied with a variety of tenants, store front is currently a popular children's clothing store, there are two artists studios, a beautiful second floor, 1-bedrm apartment, a well known landscape architect occupies the third floor for office spaces, includes a kitchen and bathroom. The lower level opens to Canal St and is utilized as a woodworking shop. There is a non-commercial elevator in the building. Nearby public parking & the train. Excellent location for visibility and numerous possibilities. Insurance cost TBD after Sprinkler System was installed, they should be less. 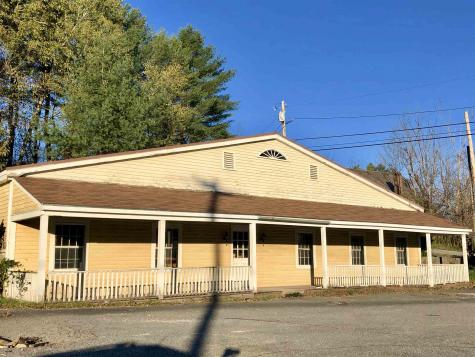 At the junctions of two Major roads - Route 11 and Route 100, the East to West and North to South cross -roads meet right on this corner! This is a prime location for retail in the center of scenic, recreational Southern Vermont. This large open 2000+ square foot space is ready for your fresh idea. With people flocking to the country for a fresh start this is a perfect opportunity to do your own thing! Right across the street form one of the best and busiest Farmers markets around, this location wont disappoint! Freshen it up, hang out your sign and live the Vermont dream of owning your own business!

Listed by Christopher Cummings and Alison Cummings of Cummings & Co

Save FavoriteSchedule TourAsk A QuestionMore Details

Copyright 2020 New England Real Estate Network, Inc. All rights reserved. This information is deemed reliable, but not guaranteed. The data relating to real estate for sale on this web site comes in part from the IDX Program of NEREN. The information being provided is for consumers' personal, non-commercial use and may not be used for any purpose other than to identify prospective properties consumers may be interested in purchasing. Data last updated July 3, 2020.